Where impact investment comes from At BGV we see part of our role as helping to build a more supportive ecosystem for tech for good ventures. One important group of people are the asset owners who allocate money to impact investing in the first place and they’re growing in number very quickly. The image below shows how impact investing has doubled in size every year over the past few years. It’s only an estimate but few doubt that impact investing is growing. 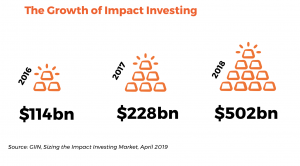 One type of asset owner that I have to admit I didn’t know much about until recently is family offices. Family offices are the organisations that decide how to allocate the capital of very wealthy individuals and families. Sometimes they are run by family members themselves or they hire people to help manage investments. The Economist estimates that globally they control up to $4 trillion of assets. They’re a unique type of investor because they don’t have the same constraints as some other types of professional investors. They can take risks that pension funds and endowments cannot. They’re often the pioneers and first investors in new types of investment vehicle.

Last month we hosted an event with our fellow BCorps and friends at Bridges, Resonance and WHEB. We gathered about 40 people from family offices to learn more about impact investing and it turned out to be a fascinating afternoon. Here are the slides from the afternoon and a few of the views from the event:

Thanks to all our friends at Bridges, Resonance and WHEB for helping to put the event together, to the Conduit for hosting us and to James Perry from B Lab UK who gave a fantastic talk to kick off the event. We hope to do more events like this so let us know if you’re interested.

If you’d like to learn more about impact investing, our fellow BCorp (and co-investor in Fairphone) Pymwymic have just released this video to introduce some of the concepts mentioned above to asset owners. Creating a goldmine of grants data